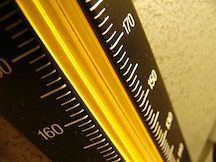 Preeclampsia is a hot topic!  Lots of research is going on in an effort to identify biomarkers that can be used to predict preeclampsia in pregnant women.  Why all the fuss?  Well, simply put, preeclampsia is rather dangerous.  A quick review of the facts:

So, if preeclampsia can't be prevented and the only effective treatment is delivery, then what good is predicting it?  That's a good question!  One reason to identify robust prediction tests is that they would permit more effective research into ways of prevent it from occurring in the first place.

Most of the research in preeclampsia prediction tests is focused on chemicals that can be measured in the mother's blood, and that list of chemicals is very, very long.  The darling of all biomarkers studied to recently are the so-called "angiogenic" markers.  These are molecules that are involved in the growth and development of blood vessels.  Because preeclampsia is believed to be caused by abnormal placentation (and the placenta is full of blood vessels), angiogenic markers are logical candidates for predictive tests.

I believe that the jury is still out when it comes to the actual use of angiogenic or other biomarkers for predicting preeclampsia.  Some diagnostic companies have jumped on the bandwagon to bring these tests to clinical laboratories but I think this is a case of "watch and wait."

Are there any good markers to predict preeclampsia?