Today's post is by a guest author, Patrick Kyle, Ph.D.  Dr. Kyle is the Director of Analytical Toxicology and an Associate Director of Clinical Chemistry at the University of Mississippi Medical Center in Jackson, MS.  He discovered a curious phenomenon when the lamellar body count is performed on a specific cell counter and he shares his observations here.  A report of this phenomenon has been published Clinical Chemistry and Laboratory Medicine.

The lamellar body count (LBC) is a relatively recent assay used for determination of fetal lung maturity (FLM) that has been discussed in previous posts (here and here) on this blog.

As with any laboratory-developed test, laboratorians should use the utmost care during LBC validation.  As reported here, during recent validation protocols in my laboratory, striking imprecision was noted in LBC values acquired from human amniotic fluid using a Beckman Coulter UniCel DxH 800.  This was unexpected because the manufacturer’s previous model (LH 750) had always yielded good precision (<10.0 CV%) with LBC.  In hopes that the problem was confined to a single instrument, the LBC results of amniotic fluid acquired from three DxH 800 platforms, a Beckman Coulter 750, and a Sysmex XE-5000 were compared.  Each of the five instruments was used to analyze two pools (low and high concentrations) of human amniotic fluid twice per day for ten non-consecutive days.  During the course of the experiment, samples were stored at 4oC and were never centrifuged or frozen.  Each day of analysis, samples were allowed to come to room temperature then inverted 5-10x immediately prior to analysis.  Each instrument aspirated sample from the same tubes during the same days.

Interestingly, a review of the daily quality control values obtained with each instrument using three concentrations of manufacturer-specific controls revealed less than 10 CV% with each instrument.  This seemed to indicate that the DxH 800 instruments were performing as designed.  Therefore, LBC proficiency test (PT) data was examined in order to compare the results of these DxH 800 platforms to those of other laboratories.  My laboratory’s College of American Pathologists 2011 LBC-B survey results were all acceptable.  As a whole, the results of the DxH 800 group were comparable to those of other Coulter instrument groups.  Most importantly, the standard deviations of the DxH 800 group results were comparable to that of other instruments and exhibited <2.0 CV%.  Because this was inconsistent with the imprecision described above, the matrix of the PT samples was questioned.  When asked, the College of American Pathologists indicated that the PT samples were composed of synthetic amniotic fluid to which porcine platelets had been added.  In other words, the PT samples had tested the instruments’ ability to count porcine platelets, not their ability to count lamellar bodies.

The manufacturer’s instrument literature was reviewed in order to investigate the source of the issue.  The DxH 800 incorporates Beckman Coulter’s new “Data Fusion” software, which allows intercommunication between flow cells to automatically correct values when specific morphologies are detected.  For example, lymphocyte counts are automatically corrected upon detection of giant platelets.  The DxH 800 includes particles from 2-25 fL in the platelet counts.  Particles less than 2 fL are categorized as debris, whereas particles >20 fL are categorized as giant platelets.  The DxH 800 histograms of EDTA blood (A) and amniotic fluid (B) below, reveal that the volumes of many lamellar bodies are smaller than those of platelets with many less than 2 fL.  Therefore, the aberrant values may have been caused by the limitations in platelet inclusion criteria (2 fL cutoff) and/or the algorithms applied by the Data Fusion technology. 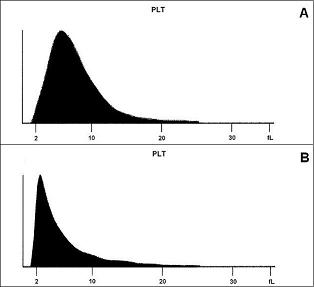 This issue emphasizes a very important fact: the LBC test should be validated using actual amniotic fluid
samples.  In recent communications with two laboratories in separate states that are using the DxH 800 for LBC testing, I learned that they had not used human amniotic fluid for validation nor were they using it for quality control purposes.  One lab chose to use commercial hematology controls for validation due to the lack of commercial controls, and to avoid issues with sample stability.  Given this information, many laboratories may not be aware of this issue and its potential problems.

In summary, all laboratory-developed assays, such as the LBC test, should be rigorously validated.  Matrix appropriate materials should be used whenever possible.  Beckman Coulter representatives are aware of the LBC issue on the new DxH 800.  However, imprecise LBC test results may preclude use of the DxH 800 for this assay.