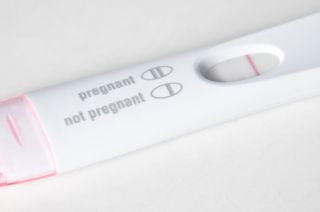 We have blogged in the past about false negative pregnancy tests due to hCG beta core fragment (hCGbcf).   After about 5 weeks of pregnancy (i.e. 3 weeks after the expected period) concentrations of hCGbcf, in urine, are higher than all other forms of hCG. Our group has shown previously that the concentration of hCGbcf can saturate one of the antibodies used in the point-of-care hospital pregnancy kits. As a result, test shows a negative result. The variant hook effect can be confirmed if testing shows a positive result after diluting the sample. This phenomenon is referred to as the "variant hook effect" and was reported to the FDA in 2009.

Our laboratory is currently working to better define how much hCGbcf is required to cause the variant hook effect. We hope that this will help manufacturers to produce devices that avoid false negative results. In the meantime, several things need to be done: